The outer packaging of goods has become a problem that many manufacturers pay attention to. With the increasing demand of people, the film coating technology is widely used in the outer packaging, which makes the products colorful and dazzling, which greatly arouses consumers' desire to buy. However, due to factors such as materials, process technology, equipment, environment, etc., the laminating process will cause blistering, wrinkling, de-inking, peeling and peeling of the laminating film. Let's talk about how to avoid the development of these phenomena for specific situations.

After the occurrence of this phenomenon, it immediately attracted the attention of the factory's quality management personnel. After specific analysis by the technicians, the reasons are roughly as follows:

The printed material itself

As a printed matter, the nature of paper, the performance of the ink, and the density of printed graphics and text, etc., all affect the quality of the film. If you use poorly formed paper to print, due to the inconsistency in the size of the ink absorption and the absorption speed in the format, it will cause the quantitative change of the paper tightness, evenness, smoothness, and moisture. If the ink printing layer is too thick or thick, the wetting, spreading, and penetrating ability of the adhesive molecules will be poor, the movement of the molecules between each other will be relatively less active, and the mechanical bonding force will be small. In addition, in the printing process, in order to prevent the printed matter from sticking, kerosene is often added to the ink to quickly condense the ink layer, causing the surface of the ink layer to crystallize, and the surface of the printed matter is smooth and tough. Wetting affinity seriously affects the bonding fastness. 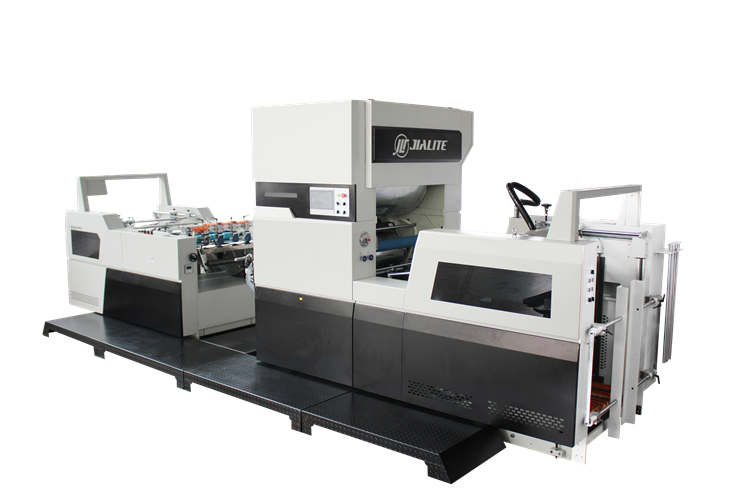 When laminating the product, first coat a layer of adhesive on the surface of the plastic film. After drying, it still fails to meet the requirements of the laminating film. In this case, increase the concentration of the solvent to dilute the adhesive for quick drying, but the moisture content is too high, and air bubbles are likely to appear when the film is pressurized, which will then peel and fall off. At the same time, the film easily absorbs grease, moisture, dust and other substances in the air, thereby reducing its surface function. Excessive humidity will also affect the volatilization of the solvent in the adhesive. Too much residual solvent will cause air isolation in the film and make the film not stick up. At the same time, uneven roller pressure, uneven rubber roller, and dirt on the rubber roller will cause wrinkles when laminating.

The automatic conveying mechanism can ensure that the printed matter does not overlap and enter the composite part equidistantly during transmission. Generally, pneumatic or frictional control is used to realize the control. The conveying is accurate and high-precision. It can also meet the above requirements when the printed matter is composited with a small format.

What is the laminating process of the laminating machine? The laminating process is a surface processing technology after printing, and it is also called post-printing plastic, post-printing glue or post-printing film. It refers to the use of a laminating machine to cover a layer of 0.012～0.020mm on the surface of the printed product. Thick transparent plastic film to form a paper-plastic integrated product processing technology. Generally speaking, it can be divided into two types, namely coating film and pre-coating film, according to the process used. According to the different film materials, it can be divided into two types: bright film and matt film.

What is the reason for the slow promotion of the pre-coating technology of the laminator? The promotion of pre-coating film in my country is relatively slow. Among them, the cost issue is a big influencing factor, which determines the enthusiasm of investors for pre-coating process.

What is the pre-coating technology of the laminator?Pre-coated film refers to the process of pre-coating and rewinding plastic film and then compounding it with paper printing. It is firstly applied by the pre-coating film processing plant to the film according to the different specifications and sizes used, and then re-rolled for the manufacturer to choose, and then combined with the printed matter.

What are the benefits to the publishing house after the laminating machine is processed?

After the paper publications are laminated, the graphics and text can be protected, and the visual effect is better, especially the matte film gives people a soft, high-grade and comfortable feeling.